It was decided to characterise the connectors used on the FLEXI-BOX in order to give some data on typical connectors available. The connectors used on our boxes are not the best quality nor are they the worse. They are not PCB mount types as used in the article by Andrey E. Stoev and this means that the coaxial outer is formed around the dielectric at the rear of the connector thus increasing capacitance. They are also longer than the PCB mount types and thus initially less suitable for calibration standards but they do make a suitable subject to study and perform quite well if their characteristics are entered into the relevant VNA definition table.

The connectors were first characterised while fitted to the Termination Box as per the production model but it gave very poor results for SHORTS and this was due to the total electrical length being that of the connector plus a proportion of the PCB. The point at which the signal from the VNA is reflected occurred somewhere along the PCB and by eliminating the PCB and placing a short directly across the back of the connector the electrical length and reactance were reduced. The dielectric of the connector was trimmed back to the length of the outer conductor on all SHORT standards and a small piece of sheet copper 0.5 mm thick was drilled and then soldered across the back of the connector. The OPEN standard dielectric and centre conductor was cut back exactly to the length of the outer conductor giving two almost identical mechanical length standards as can be seen in the photograph below. The rear of the connectors look very similar to the standards in Andrey's article except that the centre conductor of the OPEN standard is completely flush with the outer. 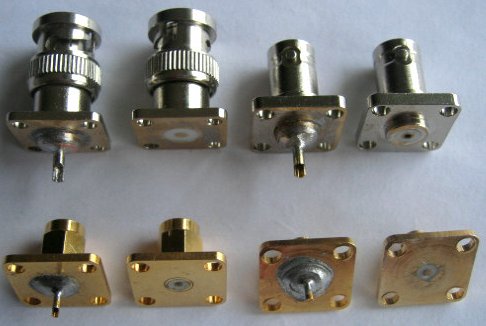 The 'point of reflection' for most SHORT standards measured during the research for this article most often came became between the end of the inner and the end of the outer as shown below in Figure 2, but not always. Most times, if the SHORT and OPEN were made the identical mechanical length, then this gave an electrical length for the SHORT that was marginally longer than that of the OPEN at low frequencies which is exactly as required.

The BNC(m) OPEN and SHORT standards did not behave according to this rule and the SHORT was electrically longer than the OPEN. This was probably due to the presence of both a transition in the centre pin and a gap in the dielectric. This difference meant that the outer of the OPEN had to be shortened until it was flush with the back surface of the flange and the dielectric had to be fixed into the outer by using super glue. The end result worked very well but it did emphasise the point that there is no way of knowing if a connector is suitable as a standard until it is characterised and there is no way of knowingly making the length ratios correct without being able to measure the standards, although the Smith chart will sometimes give an indication of a negative ratio. The SMA(f) SHORT to OPEN ratio was also very marginally on the negative side (0.369 ps) but the Smith Chart did run clockwise in the correct manner and there was no attempt made to modify the connectors.

In order to eventually be able to characterise connector standard types that do not have commercially made calibration standards available, a method of characterisation was first developed using some SMA connectors which did perform within the acceptable limits of the Keysight definition table. The results of these measurements were then compared to those from another analyser calibrated with an Keysight electronic calibration kit. The electrical delay results from the two analysers were all within 3.1 ps at 10 MHz thus showing that we were locating the measurement reference quite accurately. To make the characteristic measurements of the standards, a set of test aids was developed and measurements made using two different methods. The data from these two measurements were then processed in Excel and the electrical length and fringing error of the test aids mathematically removed. The remaining phase data was then processed again to find the electrical delay and capacitor coefficients of the calibration standards.

The quality of the Termination Box connectors (and hence the upper limit of average commercial BNC connectors) as a set of calibration standards was judged by calculating residual phase error and by measuring the OFFSET LOSS after calibration. A measurement TUR (Test Unit Ratio) of 3 was then used to set the following limits to a typical acceptable standard.

There were no calculations made to allow for measurement errors during the characterisation of the standards as this was felt to make the whole process too complex.

To demonstrate the importance of using good quality loads/terminations, measurements were made on four cheap BNC  terminations obtained from a local supplier (see Figure 3). 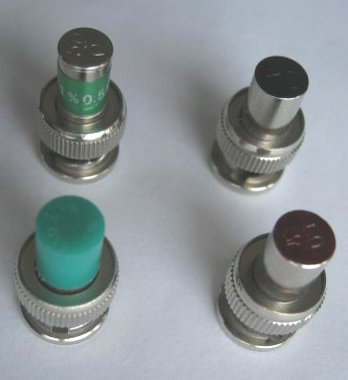 Figure 4 shows the responses of the four cheap loads together with the response of our Termination FLEXI-BOX and the calibration standard used for calibrating the analyser. The calibration standard was disconnected and re-connected before taking results to ensure that the repeatability of the connection was taken into account. BNC connectors do not make good repeatable connections at high frequencies and this can be seen from the hump at 1500 MHz on the Red Top termination response. It was possible to remove this hump by repeatedly reconnecting the termination until a good response was obtained but the results were taken in this condition in order to demonstrate the poor repeatability of BNC connectors. Repeatability was a major problem during all of the BNC measurements, not just with the LOADS. These results also show that the return loss of the cheap terminations is very poor at high frequencies and they are not really suitable to use as standards.

If a network analyser is calibrated to a poor quality load such as these cheap ones, then the measurement of a good load would appear bad as can be seen in Figure 5. The calibration for Figure 5 was performed with the cheap termination with a green label and the resulting calibration makes the accurate calibration standard look very poor.

The results show that great care should be taken when selecting a LOAD (termination). The LOAD should be tested on a calibrated analyser or at least checked with the analyser in it's initial state which usually has a calibration made with no measurement cables connected.