In the previous three articles antenna current and voltage distribution and near field radiation were investigated. This led to the conclusion that the largest current passed upwards through the antenna and that most radiation activity occurred at the end of the antenna. This seems to suggest that the well matched, grounded monopole antenna studied tends to radiate mainly upwards and an investigation into this radiation characteristic seemed to be the next logical step forward in understanding the true functionality of these antennas. Interestingly, several text book suggest that there is a radiation at a small angle from an antenna, and one text book states that there is a maximum radiation from a long wire at an angle of 17.5°. See figure Figure 318 below which is derived from Principals of Radio Engineering by R.S. GLASGOW, McGRAW-HILL BOOK COMPANY, Inc 1936 page 463 Fig. 318 upper.

R.S. GLASGOW states that "A wire 8λ in length produces four major lobes of radiation making an angle of 17.5° with the wire, as shown in Fig 318. The minor lobes are omitted for simplicity. If the wire is inclined with respect to the earth's surface, the axis of lobe a may be given in any inclination desired with respect to the horizontal". Meaning that if the long wire antenna were vertical the major radiation angle would be as per figure 2 below and a vertical monopole may probably radiate upwards and outwards in the same manner.

The radiation elevation is measured with a flat sheet antenna constructed from a single sheet of copper or brass. During measurements, the flat sheet antenna is positioned at set distances from the AUT and selected height intervals to give a two dimensional picture of the radiated levels and needs to be matched in all of these positions. The dimensions of the flat sheet antenna are trimmed for best impedance match at the test frequency over the range of positions to be measured. Although the antenna is matched to the coaxial cable it is still very inefficient because of it's small effective receiving area, but this is tolerated firstly because a small receiving area is required for obtaining a suitable resolution in relation to the AUT size and secondly because of its stability of impedance at different heights from the real ground. Using any other type of antenna with an artificial ground plane in this near field measurement would affect the AUT behaviour causing measurement error. Figure 3 displays the flat sheet antenna used for the original measurements and is shown attached to a plastic retort stand. The complete assembly used must not contain significant amounts of metal or the performance of the antenna will be affected and in this case a plastic clip for attaching a camera to a motor cycle was used very effectively. 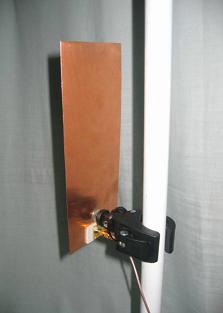 The test equipment is connected as per figure 4 using high quality cables with double screening to give high isolation and is very similar to the circuit used for the previous radiation measurements.

The amplifier is used to bring the transmit level above any external interference and to provide adequate input level to the flat sheet antenna. The bridge enables the antenna input return loss to be constantly monitored and the measurements to be taken at the antenna matching frequency. Due to the fact that there are many reflections and phase cancellations the time domain facility of the vector network analyser is used to gate out all unwanted signals. Judicious use of the gate start and stop times is required to ensure that only wanted signals are measured and care has to be taken to calculate delay times both within and external to the antenna at their relative speeds (approximately c x 0.82 and c).

The original electrical measurements were made with a vector network analyser (VNA) in a quiet radio area (no screened room was available).