Figure 3 shows the PCB after the layout has been sketched on the tinned copper surface using a red felt tip pen. There is no attempt to produce intricate artwork, just the simple functional areas that are required to make the connections. At a later stage two links are added to complete the amplifier circuit. 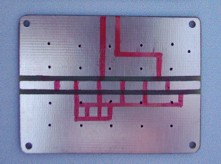 Next, the PCB is firmly clamped to the working area to ensure that the "finger count" remains constant. The outlines of the areas coloured in red are then carefully scored with a craft knife and the unwanted copper lifted with a soldering iron. After cleaning with Isopropyl Alcohol, the PCB appears as in Figure 4. The result is a bit scruffy, but for an "A" model it is adequate. 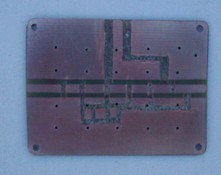 The PCB is now ready for loading with components and this is best performed before fitting the PCB into the FLEXI-BOX as in Figure 5. With so much reflective surface, it is difficult to get a clear photograph, but the black surface mount components can just be seen. 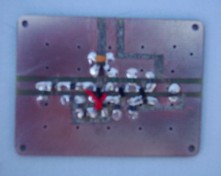 The two links (with red insulation) are also fitted at this stage.